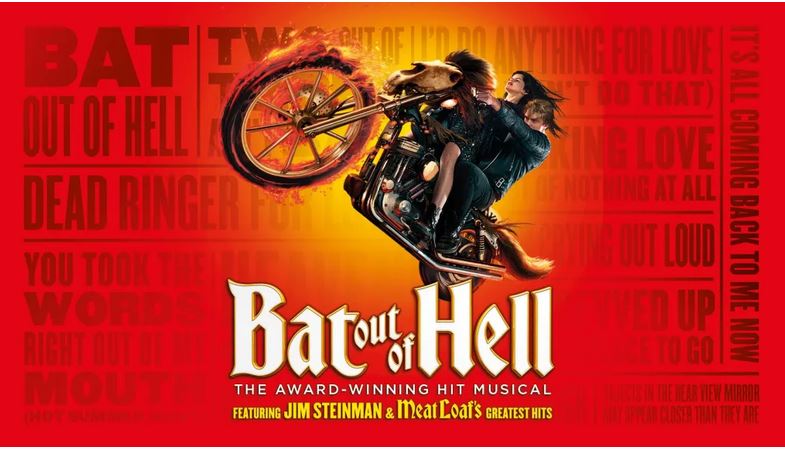 Bat out of Hell The Musical is at The Playhouse Theatre Edinburgh for two weeks (Wed 9 Feb - Sat 19 Feb 2022) and if you are a fan of the music of Jim Steinman and Meat Loaf, then you probably have your tickets booked already. If by any chance you are not a fan, then still put this one onto your “to go to” list (if you can get tickets) as it is simply a very good show and destined to become one of the great rock-musicals of modern times.

The show is essentially the songs from the Bat Out of Hell trilogy of albums – Bat Out of Hell (1977), Bat Out of Hell II: Back into Hell (1993) and Bat Out Of Hell lll : The Monster is Loose.  As well as new songs written for the show, there is also music from Jim Steinman’s solo album “Bad For Good” (1981) that never went onto the main album cycles for various reasons.

I have to admit that, over the years, the concept of paying tribute to those great teenage death songs of the 1960s (like "Tell Laura I Love Her" and "Terry") and fusing them with a story that was essentially taking  Peter Pan and the Lost Boys into a post-apocalyptic science fiction rock’n’roll fantasy had eluded me a bit, but this musical answers any questions that I ever had about that and also makes the lyrics of a few of these iconic songs much clearer.

Bat out of Hell is not like many of the Rock Opera/musical jukebox shows out there at the moment, and that is obvious from the first few songs. There is one clear reason for that, and so much of the shining light of this show is that from the very beginning, Jim Steinman conceived the songs from Bat out of Hell as a larger concept outside of the records, and stage and film were always a part of that, and Meat Loaf with his background in musical theatre always brought those performance elements to his recorded work and live performances.  Unlike so many other shows of this genre, the songs are not being shoe-horned into a story line that they were never intended to be in, here they are a natural part of the story.

Of course, bringing this cohesive vision of all of the albums and songs together for a stage show was never going to be an easy task and particularly for the vocalists as, although Meat Loaf will be forever identified with these songs, having someone simply impersonating his style on these songs would not have worked, and I don’t think the audience would have accepted that anyhow.  Taking the leading teenage roles are Glenn Adamson (Strat) and Martha Kirby (Raven), and they both work so well together here, both visually and musically. Glenn Adamson has to be credited with some outstanding performances tonight as his vocals seem perfectly suited to these songs.  For me, the title song, although a classic, has never been my favourite from the album, that has always been the wonderful “Heaven Can Wait”, and hearing Martha Kirby’s vocals on this song was the first time I have heard female vocals on this song, and it worked.

Like all good shows, we have more than one story line running through Bat out of Hell, and the pains of never growing old like the “Lost Boys” is skilfully mirrored with the pains of growing older that Raven’s parents  are experiencing, and Rob Fowler (Falco) and Sharon Sexton (Sloane) stamp their presence all over this show at every given opportunity and breathe new life and meaning into their performance of "Paradise by The Dashboard Light". We also have a few other story threads weaving their way in and out of our two main ones, and Joelle Moses (Zahara) simply brings power and authority to every song given here and puts in a fine duet with James Chisholm (Jagwire).

This show is a big production show and has had some obvious money spent on its production values, and this shows in the choreography, costumes, set design, lighting, sound and clever use of live screen monitors which all combine to give the audience an experience that only live stage productions can do justice to.

Jim Steinman was always for me one of the great composers/song-writers of his generation and Meat Loaf (aka Marvin Lee Aday) was one of the great performers of rock music, and it is sad to think that both have passed away in such a short time to each other.  Some of the songs in this show are 45 years old now and they, like the Lost Boys in this story, have simply not aged over the years, and like their music Jim Steinman and Meat Loaf will never truly age as both will live on forever through their timeless music and songs.