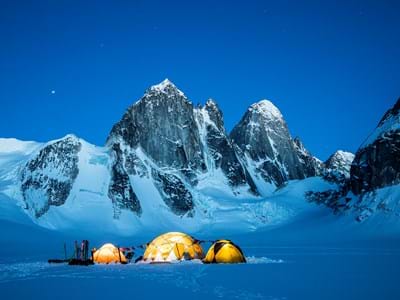 Banff Mountain Film Festival was at the Festival Theatre Edinburgh today with an afternoon programme (Blue) and an evening programme (Red). As usual, this UK and Ireland part of the festival’s tour was filling out the theatre with its usual friendly atmosphere and, of course, some of the best outdoor pursuit films out there that have been selected from over 400 submissions to the Banff Mountain Film Festival selection board in Canada.

Whether you actively pursue your own outdoor adventures or prefer to take your adventures vicariously and just watch some of the world’s best outdoor photographers and cinematographers providing you with your adrenalin rush, there is always something in these programmes for everyone. With a selection of films ranging from 4 minutes to 35 minutes (in this evening’s Red programme), the range and diversity of programming in the Banff Film Festival is always interesting and at times surprising.

Appropriately our programme opened with “West Highland Way” not only a very Scottish theme, but a very local one just a short time and distance away from Edinburgh to the west coast and the outer edges of Glasgow and the start of The West Highland Way. Here we follow former pro mountain biker Rab Wardell on his attempt to be the fastest to cover this beautiful but at times very difficult terrain on mountain bike all the way to Fort William and cover these 95 miles in the fastest recorded time to date.

There was with this film more than a touch of sadness as we all found out at the introduction to this film (although many in the audience probably knew this already), that Rab Wardell had died only a few weeks ago (August 23, 2022) at the far too young age of only 37, just two days after winning the Scottish MTB XC Championships.

The remaining films this evening took us on journeys across the globe to meet people often facing and dealing not only with their own personal challenges and goals in the outside world, but often, and perhaps more importantly, their own challenges within their own self. This dual struggle of outer and inner obstacles to overcome is clear in films like “Deep Roots” and “Reel Rock - Action Directe” where the objective to conquer a physical obstacle takes years of many failed attempts to reach the desired goal, but perhaps the film that illustrates best the indomitable human spirit that some people possess is “From My Window” as here the goal is not only to overcome physical disabilities, but also the perceptions of what far too many people think you can achieve, or not achieve, because of that physical disability.

Some of these films also bring into focus the conflicting needs of top level performance athletes and adventurers to achieve their goals and the sheer devotion in time and resources that they need to make along the way to reach their own personal peaks. We also get glimpses of the cost that this personal achievement can have on relationships with both friends and family. It is clear that even the most single minded of individuals and their sacrifices to reach their personal goals cannot be met without the support and sacrifices of many others close to them. Also in some cases there is that question of where does personal drive cross over that fine line into an all-consuming and potentially dangerous obsession, not only in physical terms but in mental disciplines too?

At the end of the day though, this film festival, as always, reminds us of the wonders of nature that are still out there to explore.  However, to ensure that these wonders are still there for future generations to do the same, we must always remind ourselves that we do not own any of these wonders, that we are merely the custodians of them for those who will come after us.

A little reminder that Banff’s sister film festival – “The Ocean Film Festival” returns to Edinburgh and The Festival Theatre on 12th February 2023.