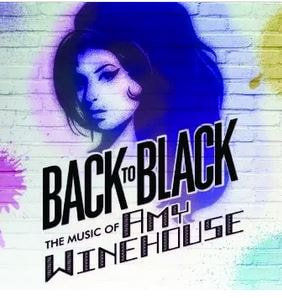 Back to Black The Music of Amy Winehouse at theSpace @ Symposium Hall by Night Owl Productions is a show I was honestly thinking of not going to at this year’s Edinburgh Festival Fringe for one reason, and that was Amy Winehouse. I clearly remember the very first time I heard Amy’s voice on the radio and, for me, I knew that I was hearing a completely unique vocalist who was clearly one of the defining voices of her generation and I simply knew that no one was going to come close to sounding like Amy ever again.

Fortunately though, I know Night Owl Productions well enough to know that they are never trying to “impersonate” another artist in their shows, but pay tribute to the music itself.  I had also seen Reine Beau Anderson Dudley who is singing these songs earlier in a very different “The Carpenters Songbook” show and there was at times something about her voice that made me want to hear just what she could do with Amy Winehouse songs.

Any singer trying to deliver their own version of many of these songs to an audience is always going to face an uphill battle, as Amy Winehouse was at heart a jazz singer with an instinct for unique vocal phrasing who also often used her voice more like a musical instrument as she often took different jazz lines of a song and improvised around them. There was also that fusion in there of soul music (often that classic early Motown beat) and contemporary pop music.

It was a pleasant surprise then tonight to find that Reine Beau Anderson Dudley is also at heart a jazz vocalist and was perfectly at home here with the way that Amy Winehouse would so often explore elements within the basic framework of a song and work around the band (in this case The Night Owl Band).  Also helping this performance was an obvious respect for this music and for Amy Winehouse from Reine.  Was she Amy Winehouse for an hour or so, of course not, there was no attempt to do that, but this performance was probably about as close as you were going to get in performance style without crossing over into that dangerous “copy-cat” territory. This show was simply one talented singer performing the songs of Amy Winehouse. Oddly, so much of what drew me to the  voice of Amy Winehouse was a sense of inner pain, and almost weariness of the world at times, and you knew this was coming from deep in her heart. So many of the signs of what was to come were there in plain sight all along, but as is so often the case, people that maybe should have been listening were not. Thankfully Reine does not sound like she is in that troubled space.

As you might have guessed from the title of this show, a lot of the songs come from the Back To Black album – “Me and Mr Jones”, “Love is A Losing Game”, You Know I’m No Good” and others. There are some other obvious songs that have to be in this set list too, and a few surprises, and Reine Beau Anderson Dudley is doing them all in her own unique style too.