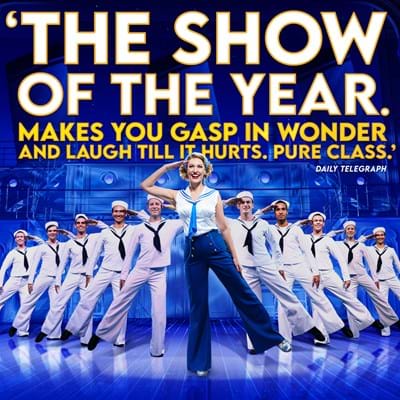 Anything Goes is at the Festival Theatre Edinburgh this week (Wed 11 to Sun 15 May) and for anyone wanting to see and hear a big budget song and dance musical with some classic songs, this will probably be a show for you.

The first thing that anyone will notice when the stage curtain rises on this show is the stage set, as this recreation of one of the decks of the cruise ship, SS American is a large, technically complex and obviously very expensive set for any show, let alone a touring show. Here, set designer Derek McLane has done a great job not only with the main set-piece, but also cleverly incorporating ways to change ship locations seamlessly throughout the show.

The second visual detail that most people will notice is the attention to costume, and again there has obviously been a considerable budget in this area to allow costume designer Jon Morrell to create costumes that take us back to the style and glamour days that people with money could enjoy aboard a high class cruise ship of the day. Many of the costumes of course are also carefully designed to allow the best movement possible for the many song and dance numbers of this show.

To the show then.  Anything Goes is simply a classic show of the genre with the original Broadway production taking place in 1934. This show has timeless songs (music and lyrics) by Cole Porter, original book by the creative team of Guy Bolton and P.G. Wodehouse with later revisions by the creative partnership of Howard Lindsay and Russel Crouse.  A 1956 film starring Bing Crosby and Donald O’Connor was also made and this Hollywood musical is probably still in many people’s memories too.

If you are a song/dance performer then this show must be a bit like working in a dream as there are just so many classic songs here, “I Get A Kick Out of You”, “You’re The Top”, “It’s De-Lovely” to name just a few, and of course “Anything Goes”.  Then to top it off, some equally classic dance and tap-dance routines.  The large budget for this show is also giving us (even on a touring show) the added luxury of an orchestra performing this timeless music live.  This of course means that our performers on stage have to have their song and dance timings absolutely perfect and when this is often incorporating comedy routines too, then you realise just how good anyone has to be to be in this show.

Headlining this show is Kerry Ellis as nightclub singer Reno Sweeney, and Kerry not only does all of her songs and dance routines to an incredibly high standard, but also has that very light comedy touch that a character like Reno needs for other elements of the story. In this show, Kerry Ellis stamped her performance authority all over it and whenever she is on stage, this show is more at times “The Kerry Ellis Show”.

We have a cast here with huge combined stage, film and television experience and although Bonnie Langford plays the part of Evangeline Harcourt very well, it would have been nice for some room in the story being there to highlight her own considerable song and dance routine skills.

Any musical of this period seems often to have a paper thin, and almost ludicrous, script and this one is no different, but somehow set in the fantasy land that these stories exist in, they always not only seem to work, but provide some great comedy moments too, and Denis Lawson gets more than his fair share of these moments in this story with his portrayal of Public Enemy No 13 “Moonface Martin”  The super-rich Elisha Whitney was being played this evening by Clive Hayward and not Simon Callow in the role, and Clive was obviously having so much fun with this light comedy role.

This, as almost always in these stories, is also a boy meets girl, boy loses girl, girl meets boy story and Samuel Edwards as Billy Crocker, Nicole-Lily Baisden (Hope Harcourt) and Haydn Oakley (Lord Evelyn Oakleigh) get to fill out our love triangles whilst also performing some song and dance routine classics. Carly Mercedes Dyer also gets some fine lines and dance routines as our Mobster’s Moll  Erma.

The odd thing about these apparently effortless to perform Cole Porter songs is that they are anything but that. These songs have some incredibly difficult arrangements and timings for any vocalist to sing and although Kerry Ellis gets everything pretty much perfect, some songs could do with some minor arrangement changes to better suit some other cast members’ vocals at times.

Song and dance is at the heart of this show and there are some really impressive routines here including getting 20 dancers all in perfect tap dance rhythm and time for just one of them.

The music from this show has travelled timelessly down through nearly 90 years, and this current production is a great on stage homage to all of these great songs, those amazing dance routines and all of that nostalgic glamour of the times.  Plus of course, also having a cast with the talents and style required to perform all of this with such apparent ease on stage for this production.  The humour of the show is another thing though. Few things travel down the years as badly as period humour and this is where the show has a problem as so many of the jokes, the visual humour (even some of the story) was made for a very different time and a very different audience and so much of it is simply not funny any longer.

This is in the end though a timeless, classic song and dance show, and these songs, and the dance numbers that go with them, will last the test of time, particularly with performers like Kerry Ellis to bring them to life on stage.