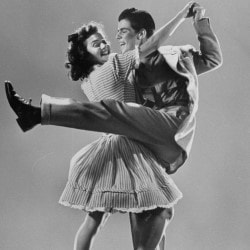 1933 – Prohibition Ends! Long Live Bessie Smith and the Blues Queens by Ali Affleck featuring the Gin Mill Genies a the SpaceUK 63 Jeffrey Street (aka Old St Pauls Episcopal Church) is one of the performance gems of this year’s Edinburgh Festival Fringe.

Prohibition has just finished and Ali Affleck is at “Mama KCs” tavern for the first liquor legal bar night in 13 years with her friends and, tonight, the girls are out in every sense of the word as Prohibition ends and so it seems do inhibitions.

If you have not come across Ali Affleck before, then be prepared to be surprised as this award winning Jazz singer and band leader not only has an vast knowledge of the Blues Queens and their songs from this period, she is also one of the best interpreters and performers of them live on stage.  Ali’s reputation in the Jazz world also means that her band is always made up of some of the best jazz and blues musicians out there.

This show is a cleverly constructed narrative where Ali’s 1933 persona not only knows the songs of Blues Queens of the period, but they are also friends with the stories of their songs being written into her daily life too. This was the Golden Age of the Speakeasy Queens of the Blues and their songs, and what songs they were as singers like Alberta Hunter, Victoria Spivey, Mamie Smith and Bessie Smith defined an era. Here were songs of subtle innuendo, not so subtle, and downright explicit, and their stories were so often about misbehaving, and all too often mistreated, men and women, and of course sex and drink. Many times these songs mirrored the real private lives of the singers, but perhaps the reason that these songs were so popular was that they also reflected the real lives of many people listening to them whether in some gin and whisky soaked bar hoping that tonight was not the night the police would raid it (if they had not been paid enough money not to) or listening to these songs on 78 records, or maybe just one or two perhaps somehow slipping past the censor’s ear on the local radio station.

This venue is one that actually works well for this show, it has that air of “better days” about it and Ali Affleck uses this to best effect for her band and the dancers who are in her bar tonight as they play and dance to their newly regained freedom and the often outrageous lyrics of these songs. In Ali’s bar no one needs to pretend anymore who the real person inside them is.

Cutting through this thick air of music, innuendo, gin, and smoke (we have to imagine the last two) is that unmistakable sound of Colin Steele and his trumpet, a perfect match for Ali’s vocals that for an hour or so seem to have the ability to take us all back in time to 1933.  Other band members include Ross Baird (guitar), Campbell Normand (piano), Roy Percy (bass) and “bar owner” and 2nd vocals Kassandra E’silva

Ali Affleck has more songs and stories of the Queens of the Blues to tell at this year’s Fringe too, so try and get to as many as you can as there is always a new song to be found and more history of those songs to be learned from Ali Affleck, and all performed in her own inimitable style.