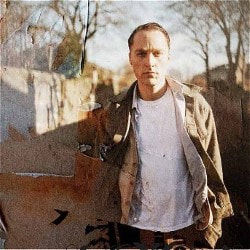 Adam Holmes Hope Park is a series of concerts (17 to 23 August) at Pleasance at EICC - Lammermuir Theatre for this year’s Edinburgh Festival Fringe, and as you might have guessed from the title, the spotlight is on Adam’s new album “Hope Park”.

I have been hearing a lot of good things about the music of this Edinburgh-born singer-songwriter over the last few years, but for some reason this is the first time that I have managed to catch up with him in his own solo concert, and the wait was worth it. In this time, Adam Holmes has also quietly been attracting much attention on the Scottish Folk music scene and this has seen him working with or sharing the same stage with some of Scotland’s brightest musical talents (John McCusker, Karine Polwart, and Eddi Reader to name only a few) and has established him firmly as one of the rising stars in contemporary folk music.

The folk musician tag may be sticking to Adam Holmes for the moment, but I never like the way that creative artists are pigeon-holed into one genre box or another (often for the purpose of marketing), and listening to his words and music tonight it is obvious that Adam is far more than just a genre-label in a music store.  For me, Adam Holmes is first and foremost a wordsmith who pays close attention to everyone and everything around him in this world and in turn takes inspiration from the little moments, the little details of life, that all too many of us simply let slip by us without ever really noticing them. Somehow Adam takes these little frozen moments in time and weaves words into stories and paints within those stories worlds and pictures for us all to enter into though his music.

Much of the music in tonight’s set came from the new album “Hope Park” and his previous album “Dreamweaver” (written mostly about his experiences of becoming a father for the first time), and something about these songs reminded me at times of that gentle, laid back style of 1960s/1970s singer-songwriters like James Taylor and Carly Simon, and only time will tell if any of Adam Holmes’ songs prove to be as timeless.

Opening this set with “Mother’s Arms” (Hope Park), Adam then moved on to “I Saw The Devil In The Morning” (Dreamweaver).  Other songs this evening, including “Oh My God”, “Nadine” “Hard Times” and “I Need Your Love Tonight” clearly show a songwriter who not only draws upon a diverse range of events, observations and emotions for his songs, but one who is still very much developing as a writer, a musician, and perhaps more importantly as Adam Holmes.  Where these developments will take him and his music is going to be an interesting journey for us all to watch and listen to in the coming years.