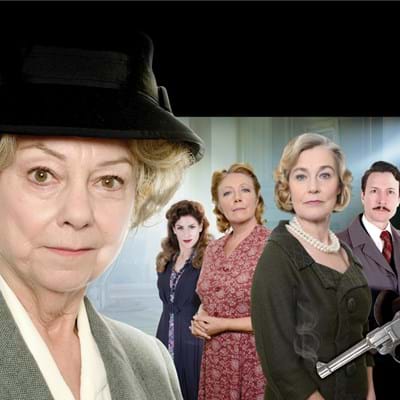 Agatha Christie’s A Murder Is Announced is at the King’s Theatre this week (Tue 03 to Sat 07 May) and as always for a murder mystery on stage, the theatre was full of people.  Something about a good murder story just seems to attract so many people, and what that says about our inner psyche maybe best remains unanswered.  Murder and mystery then, two interwoven strands of classic story telling, and did anyone ever master this art better than Agatha Christie? Perhaps not.

The chances are high that many people in the audience tonight will have read the original book (first published in the UK by the Collins Crime Club in June 1950), but even if they have not then perhaps they  are familiar with film and television adaptations, or at very least the Miss Marple character herself.

If you are going to bring any Agatha Christie story to the stage then you really have to get a few things right to start with, and for me the main things to do are to keep it as a period drama work, stick fairly closely to the original book, and of course have an experienced cast on stage as, for some reason, any weak performances always stand out like bright beacons.  With this production, Middle Ground Theatre Company have ticked all of the boxes and created on stage a little bubble world of an almost sleepy, but perfectly mannered Little Paddocks, Chipping Cleghorn in the 1950s. This is a world of people of some wealth (but not that wealthy) and obvious privilege living out their lives in an almost dream state oblivion to the greater world around them, a world where stability is everything and change, if it ever happens, happens so slowly that no one really notices it. This is certainly the last place that you would expect a murder to happen, even a very clean and polite one.

As is often the case for this type of murder mystery there is one stage set throughout the production. This is good as it means that, without the need for a change of sets, one fixed stage set like this can have the care and attention given to it that is needed to make sure all the correct period props are there to create the illusion of stepping back in time for an evening. Equal care has been spent on this production in getting those period costume details correct too, and there are (for the women at least) a surprising amount of costume changes here.
With the period details of set and costume so carefully recreating the right feeling and atmosphere on stage, our cast now have a believable world to step into and reveal in the end who the final villain of the story is.  Of course, this being an Agatha Christie story, there is a large web of deceit that has already been spun and slowly starts to unravel.  Is anyone really who they are claiming to be, as so many people seem to have a motive and a reason to commit murder.

A Murder is Announced travels along at a very gentle pace of life (as everything in Chipping Cleghorn seems to do), but always the story is moving along and this is really deceptive as there is a tightly written story here opening up, and facts are being revealed at a pace often very quickly and in direct contrast to the almost relaxed and uneventful events on stage.  This of course is due in a large part to the strength of the original source material, but also to Leslie Darbon who has adapted this work for stage.  Tight direction (and design) by Michael Lunney also adds greatly to the way this story unfolds and eventually gives up its secrets on stage.

The gentle paced illusion of being in another time and place of course is ultimately dependent upon having a cast with the performance skills to bring this story and the script to life, and all of the cast do this with believable style and authority on stage.  These roles are not easy to play, getting that balance between believability and an over the top, outdated stereotype is a fine balancing act, and this is where the many years of performance skills that the main cast each individually have shows.  There is nowhere for anyone to hide on stage here, no large set pieces to distract us as an audience from the main story. This is simply a story-driven theatrical production where a high degree of performance skill is needed to make the difficult look not only effortless but so natural on stage.