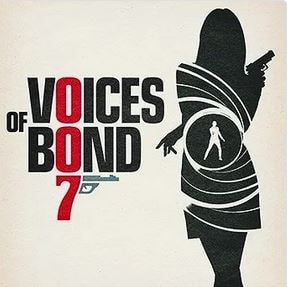 Voices of Bond by Night Owl Productions returns to the Edinburgh Festival Fringe at theSpace @ Symposium hall, and this almost full to capacity venue this afternoon proves that many people simply like their James Bond theme songs.

For 60 years now, James Bond films have been highlights of not only the film world, but the film soundtrack and film theme song world with so many performers considering being chosen to sing, or in some cases, write and sing a James Bond theme song to be one of the highlights of their careers. So many famous names have given us these incredible songs to remember – Diamonds Are Forever (Shirley Bassey), Goldfinger (Shirley Bassey), Nobody Does it Better (Carly Simon), Live and Let Die (Paul McCartney & Wings) to name but a few of them.

Much of the earlier music for the films and the theme songs was created by Monty Norman and John Barry and their musical legacy was to influence all that came after them in Bond films in one way or another, and here in this show Night Owl give us a little bit of that film music history, and of course as many songs as will fit into the time format of this show.  That does of course mean that some of your personal favourites might not be here, but the selection that they have chosen cover most of the songs that we all immediately identify with James Bond films.

Bringing songs like this to a Fringe stage is always going to be a musical compromise as these original songs were often huge production numbers with full orchestras behind them, but the Night Owl band do them more than justice with some clever musical arrangements that give the illusion at times of far more musicians being on stage.

James Bond songs are of course about not only singers, but singers with very identifiable vocals, and over the years the vocal styles and performance ranges of these artists have been large and diverse. Many of the original performers have also been household names with often larger than life stage personalities.  For any one singer trying to re-create all of these iconic songs and sounds in one show it is always going to be an uphill battle but, here, vocalist Maia Elsey does a very good job, and although some songs were obviously better suited to her than others, this was a strong and diverse performance that the audience were obviously very appreciative of.

This show is what it is, and it does exactly what it promises to do on the advertising posters, take the audience on a walk down the memory lane of James Bond theme songs, and it does it well.